There’s not much on this risk assessment as most of the shoot will take place in school. However, that doesn’t mean we can’t account for minor things as even if those aren’t accounted for it may cause issue down the line.

The PMA for our narrative shoot. Can’t say there’s a lot here but we hope to make up for that in mise en scene and performance.

To further get a grasp on how to represent his music, our group looked further into Lemon Demon and Neil Cicierega to get a taste of who they are and what they. as stars, represent. This is so we can encode similar motifs in our music videos which resonate with fans of Neil and his band. Neil was formerly known for creating “memes” early on in the website Youtube’s lifespan. These would include works such as “Potter Puppet Pals” and “Brody Quest.” These “memes” were of a satirical nature and were inherently very simple concepts. Integrating music into a fun and dumb video which resonated with his core audience. Cut to present day and through both music and social media, Neil presents his content and himself in a very similar way. Very satirical, comedic, all the things which present themselves throughout his content. It’s more so apparent in Touch Tone Telephone wherein the caricature of a conspiracy theorist is shown conspiring over this grander scheme, it’s purely satirical. Ultimately, Neil Cicierega is a man of the present day and at the forefront of post modernism. With a lot of his works being satirical and remixes of currently existing things, a niche most prevalent on the internet today.

Published by alexradford on 16th September 2020

I think it’s time… For you to know…

Location has since changed to our school’s white photography studio.

Published by alexradford on 16th September 2020

For this task Zoe, resident artist, compiled all of our ideas into a small animatic using Photoshop. Using these, we’ve a basic outline for the general flow/composition of the music video.

Published by alexradford on 8th July 2020

After getting a few shots over the course of 5 hours it’s time to see what we did right (and what we did very wrong).

What was done well:

Here are some main reflections to take from the shoot:

Published by alexradford on 7th July 2020

Here is our production meeting agenda for shoot 1 containing date time, equipment, props, costume, the works so we have a good foundation for our shoot.

Published by alexradford on 3rd July 2020

Before we go out on shoot here are some basic outlines for potential risks, where we are going to be and whether the potential dangers are controlled. 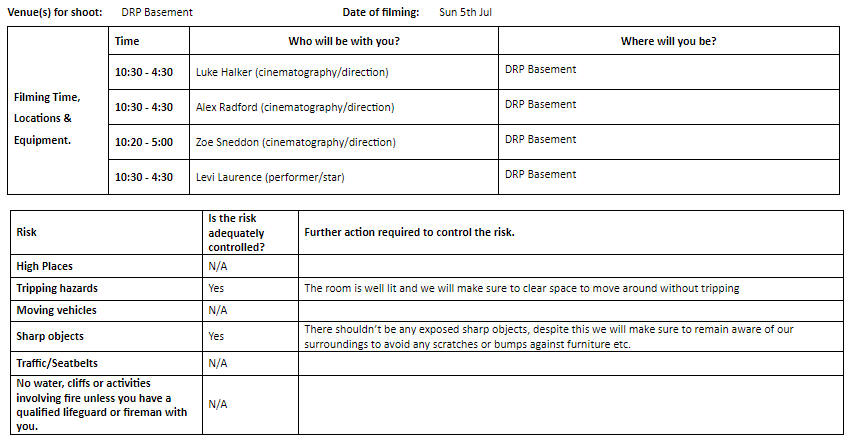 My signed copy of the risk assessment 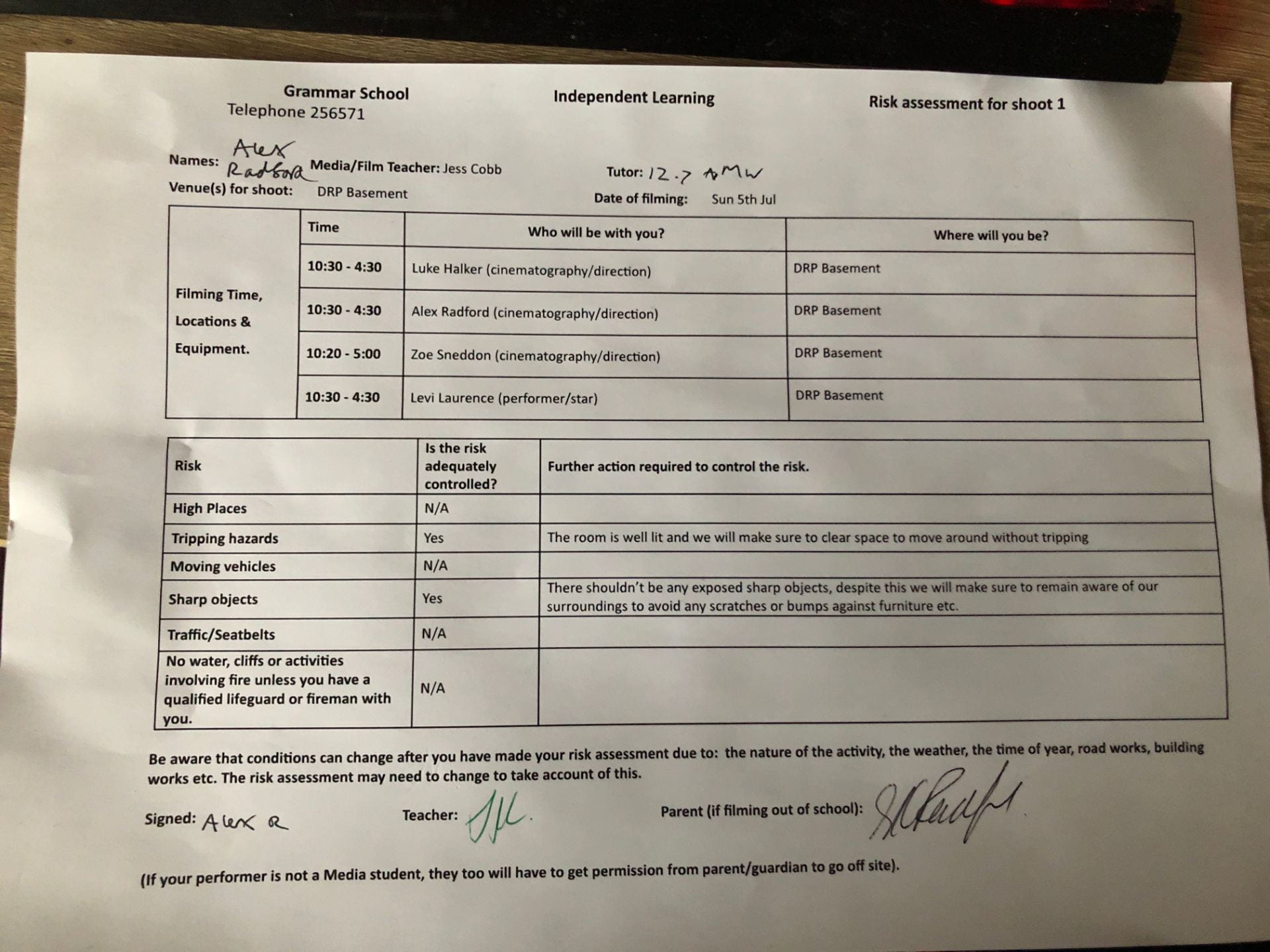 As for the location, Zoe got in contact with her dad and we arranged shooting our music video in the DRP basement. We figured the cramped basement space would fit our mise en scene quite cosily.

Published by alexradford on 2nd July 2020

Time to stalk the general public for the second time

In researching Lemon Demon (or their associated members) no official documentation was really available to take from. This required us to look at some more third party polls and analytics from less reliable sources. That being said, here’s what we discovered about our audience (with a grain of salt). The study we agreed on was done by user Parksmanteau on Reddit (thread here) and the presentation details audience gender, interests in other bands. You can see the full presentation here.

The survey concluded that a majority of lemon demon fans are male, under 18 and mainly LGBTQ+ meaning that Lemon Demon’s appeal is aimed at largely younger, more progressive audiences.

Given this information, we can start suiting our music video accordingly to appeal to the audience of the music. We can target themes and references which we can encode into our production for our audience to decode and add value to our production. Given that our audience is also heavily born in the 2000s,      there are a lot of references to the internet and modern media we can encode as our video is based around online conspiracies.

Published by alexradford on 29th June 2020

Below is a shot list for our first shoot. We looked at various shots we could include in our initial shoot with various gif examples and explanations on what they achieve. These are some fairly generic shots which we thought about how to implement in our music video. As well as some more nuanced shots relating to our specific video. Our music video technically falls within the “pop” genre which is very mainstream and conventional. In that regard there tend to be a lot of mid shots or long shots with intense focus on the star’s thoughts and feelings shown through a rather static performance. However, Touch Tone Telephone isn’t traditional pop. It has a story to tell which is very niche and out there so we’re tackling the music video in an unconventional way. Examples like the close up or low angle showing the star in a position of intimacy and self imposed power with the audience, telling them about this greater conspiracy.