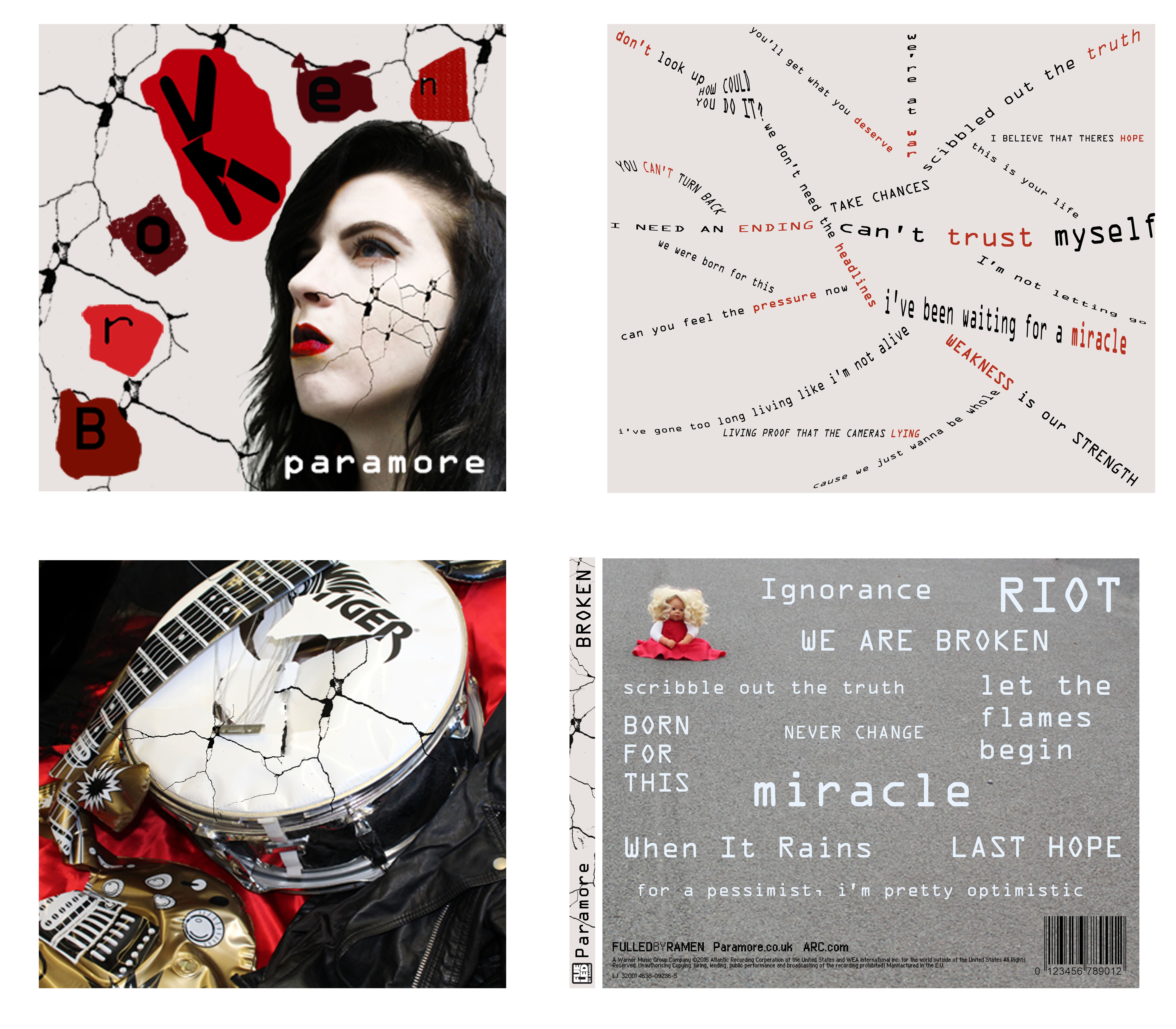 The use of Camera and Photoshop to take and manipulate engaging images.

The use of Photoshop in these images are interesting and communicate the genre well. The use of cracks through the cover and on the girls face create a sense of destruction and confliction. The cracks on her face work as a visual metaphor to represent her mindset of being completely broken which reflects the sadness and misery that this music is intended to communicate. The design used through camera seems to follow conventions as she is looking away from the camera into open space. This conveys a feeling of isolation and sadness as she can’t keep focus on things around her.

The selection of mise-en-scene in these photos and the meaning it communicates.

The use of lighting in this album cover seems to be quite high key with heavy use of key light whilst the absence of the back light and filler. This seems unconventional to the genre as the many other artists use low key to  communicate sadness through darkness. However, this album manages to achieve that through other elements. The make up to give her a white face makes her seem ghostly and blank which creates a stronger emphasis on the cracks as they are easier to see. The black hair creates a strong contrast between her and the whiteness of the make up which portrays a sense of confliction causing the cracks on the cover. The hair being let down and messy communicates a sense of chaos and informality.

The choice of words that talk to and engage a specific audience.

On the song list on the back of the album the key words that relate to the messages communicated are highlighted in order to draw attention to them. Words such as, ‘Weakness’ and ‘Trust’ are key descriptions of the vibe that is given off from the album design. These words are presented on the cover in order to draw attention to them as they seem most appealing or relatable to the audience that are looking for something to help them relax and find music that can be apparent to their life. The album title ‘Broken’ is unique and relevant to the album’s mood as it further reflects the implications of mental health. It creates a sense of intrigue to the audience as they find such words relatable to their individual situations, they may believe that the music in the album can bring them away from their problems.

The creative use of DTP to integrate images and text and use colour / typefaces.

The album title ‘Broken’ communicates to the target audience as it is a clear reflection of mental health issues, such as, depression. The font used and the positioning of each letter being spread out amongst the screen creates a sense of disorientation and confusion. The overall design are clear messages intended for audience that can relate to these messages are drawn to it in order to find calmness. The positioning of the song titles on the back of the album are edited so they are spread across with no coherent pattern which further reflects the disorientation and unease that the album is attempting to communicate.