Me and Matthieu created a storyboard with the sheet above. This was the first step before creating this montage. I found this task really helpful because it gained us an idea of what we wanted to create when it comes to us filming it. I thoroughly enjoyed doing task, although I’m not very good at drawing, I could elaborate my understanding of film production and directing it. I focused on creating a sense of chaos throughout the day that I am creating with fast cutting speeds. I also believe incorporating a variety of camera techniques and angles is very important, and I don’t feel that I took advantage of this in my last task.

This is the final video of the montage I made on a day in the life of a student. Making the storyboard really aided me in creating a strong structure of the video I wish to make. This task helped me learn to: frame a shot well, use a tripod at different heights and angles, and to also shoot from different angles and distances.

Things I need to Improve:

This task taught me how to edit clips at a much faster speed. I also learnt more on Premiere Pro, this included the colour balance.

I used the following camera techniques:

These variety of shot types are for dramatic fact in the video. It is to make the clip more interesting as it would be extremely tedious if each shot was the same. I found that when I came to the final product I had not used a large enough range of shots which really restricted the quality of the video. I used a closeup to highlight the facial expression of Lucy as it was crucial to show her frustration.

I have learnt to use the following continuity editing rules:

These rules were vital to the success of the shot. Using the point and shoot cameras were really effective and easy to use, these are also much simpler to film than the DSLR which makes it much more straightforward. 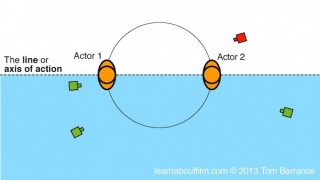 If I would do this task again I would have put effects onto the video in PremierPro. This would have made it look more professional and have an overall higher quality video. Overall I believe I did not apply myself to this task fully and if I had fully applied myself it would have been a lot better.

Here is my Media Studies blog.