This is our analysis of the website for the rock band Bring Me The Horizon, this analysis helped us identify how a professional website is formatted and how the conventional techniques of a rock bands website.

Here is the sitemap that my partner and I made, on this we have listed and mapped out the contents of a website page and formatted our flowchart so it goes along the lines of where that content would actually be placed on our webpage. We have applied each key component to our sitemap which includes, the splash page, the main pages and links to others and what content would appear on these pages while also establishing where they would be above or below the fold.

This task is useful for our website as it gives us a general idea of how to layout our website with what components to put of it, where and what content would be on it, when producing our actual webpage I will refer back to this as a guide.

Here is our first draft of our digipak.

The feedback given to us on what to improve on.

This is the moodboard we made to apply ideas for what we could do for our digipak, here we tried to add conventional ideas of the alternative rock genre to make our digipak’s genre more identifiable. We applied many ideas such as abstract colouring and the distortion of pictures in attempt to have an edgy and weird feel, the red hand in the middle and the plain black background is what I believe to be most conventional as they give a grungy feel that is kind of feel we’d like to go for.

We were attempting to have a grungy and sort of abstract design on our moodboard, for example the cut out face at the top right was an idea we were pushing to be on our actual digipak having multiple face with different colours mixed together.

Although the moodbard is a bit brief with little on it, it is still useful to us as we were able to come up with many possible ideas that fit our genre, so now when making the digipak we can explore these ideas more.

Here is a bands web page that I have looked at applying website terminology in order to identify how they have designed their website out to advertise the band in question (Mcfly). On this web page I have identified five features including one fold, navigation, leaderboard, hero shot and a banner ad, each of which are all used in order to advertise the band to have you buy their merchandise of listen to their music. It is obvious to identify this websites call to action and it being having the audience to participate with the band, this is done with links to their social media and their online shops to buy their music and merchandise.

This task was useful as it taught me website terminology and what they meant that I didn’t know prior to doing this, this will be useful to my group when creating our own website as we now know how to properly lay out a website in order to advertise our band and draw in our audience to participate more efficiently.

Here are the results for our digipak photo shoot of which we have collected all of them shots we’ve taken and put them on a contact sheet. We believe that this shoot was a success as we managed to get the shots that we originally wanted and in very good quality but we also got a variety of other shots as well that have given us more creativity and ideas for what we want to do for our digipak design.

This shoot went very well although we did come across some problems with equipment at the start that in future should have been sorted earlier, we still got a healthy amount of shots that many of which can be used in our product. When it comes to which pictures we will use it would be close up shots of each of our band members and whole band shots.

This is my groups production meeting agenda for out digipak photo shoot, in this document we established the dates of meeting and the shoot, what kind of shots we wanted, who we would be shooting and the mise-en-scene that we want for it. This was useful for our shoot as it gave us a plan in which we could stick to during the shoot and made it more organized to set up and get our performers to know what they need and where they’re going.

This risk assessments assessment is useful as that we can identify any hazards that may be present at the location of the shoot so we can control that risk ensuring that the shoot environment is completely safe for both us and our performers.

With my digipack mock up I went around with a list of genres and adjectives and asked people which genre they think it most resembles and which adjective describes it best. The options for genre were punk, indie, alternative rock, heavy metal and pop in which most people thought that it was either punk or alternative rock both, this is helpful as it shows us that our genre is recognizable within our product but it can be mixed up with other genres that have similar aspects easily, therefore in the actual product we will have to add more conventional alternative rock themes so that it would be more clearly identifiable.

On the other hand with the adjectives we had heavy, playful, chill, edgy and grungy in which almost everybody choose grungy to describe my digipak. This is very good as a grungy feel is part of what we were going for as it is an aspect within the alternative rock genre so this the tells us that grungy themes do persists in our product and that they are easily identifiable. Therefore this tells us that in our final product the design style that we are going for is on the right track and only minor changes need to be made. 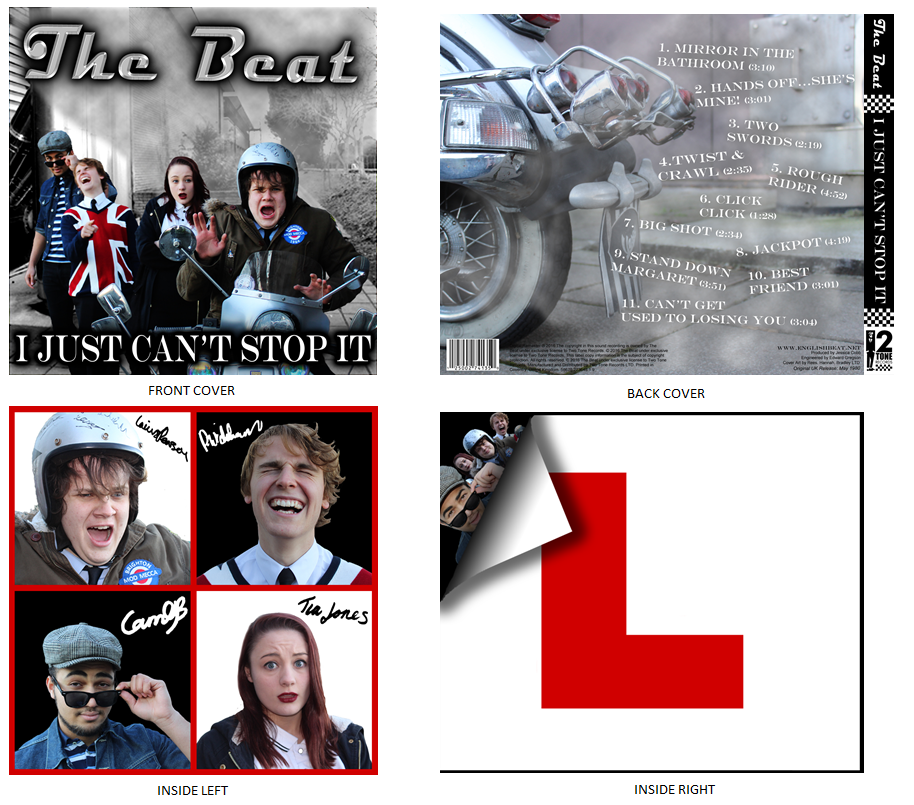 Appropriate to task: I would give it a lower level 4 in this as the product is conventional and reflects its genre which the evidence of a mod and British punk/rock them as shown by the use of a Union Jack flag and the electric scooter. In addition it uses a good variety of models totalling in 4 unique personalities and costume that is conventional to the genre. There are some comedy aspects with how some of the models are shot but this is controlled so it doesn’t go all the way to being a parody.

Use ICT appropriately: This is an upper level 4 as there is clear and intelligent use of apps such as photoshop, indesign and possible other. This is shown through the layout of the digipak for example the inside right cover is a picture of an L plate but then edited so the top left corner peels off to reveal another picture of the band.

Manipulating Photos: The pictures used in this digipak have clear and skillful use of photo manipulation therefore I’m giving it an upper level 4, this is shown through how they use colour filter on the front and back cover, specifically on the front cover where the background of the image has a black and white filter that appeals to the British punk/rock genre and tone while also having the band members in the foreground still in colour presenting the theme of the bands importance.

Mise-En-Scene selection: clear use of mise-en-scene that is a lower level 4, firstly costume very well suits a British music genre theme with the use of a Union Jack shirt and clothing that closely represents a mod. lighting is calm, done well in each picture so that we can clearly see band members and objects, the action is conventional to a band, showing them all close together and getting up to antics, make-up is only seems to be done on one band member and is more casual, the props used emphasise this mod theme with the electric scooter and the helmet and finally the setting being all greyed out is conventional to the genre and helps the foreground stand out.

This is the mock up for our digipak. For this we tried to go for an alternative rock style as that is our genre, therefore we didn’t want to go with hardcore and dark imagery and instead went for a more lighthearted and a more band focused theme while still having a bit of edgy and grungy elements really trying to go for an “alternative” version of rock that some may see as an 80’s rock style. This mock up may come across as too lighthearted and could be seen as a parody so when it comes to our actual digipak we will have to make it a bit more edgy or dark to fit the alternative rock genre more.

This task has helped us establish a basic idea for what we want to do with our final product, using most of the ideas that we have implemented to our mock we will adjust and stylize them with our actual band members making use of light and editing techniques to achieve these effects.