Please click on the image to see the Prezi.

During the creation of our website, there have been a lot of new production skills we have learnt and will help me in my future projects:

One of the features that we have included in our website are buttons that hyperlink to relevant websites. The tickets section sends you to a ticket booking website and the digipak has a button next to it where it links the user to the iTunes website and allows you to pre-order the album. We were able to do this by adding in a button onto the website and changing the link location to ‘Web Address’ and inserting the corresponding link. This feature will be useful if I am to ever make a website again as I will be able to promote my media from other websites and make user accessibility very simple.

The tab that allowed me to add media to the website was very important in getting across the alternative star image of the band. I was able to upload pngs, jpgs and gifs from my computer that included band merch, pictures of the band during the music video shoot and gifs that I have created from the music video. This gives the whole website a similar brand sense and by doing this I have gotten a clearer idea of how to tie different items of a whole project together.

This feature is essential to my website as it allows me to write the information that the user requires. By editing the font’s typeface and size, I have been able to create a consistent style and theme that runs throughout my website. Keeping my housestyle and colour pallet the same will make my brand easily identifiable to my audience and after doing this I have learnt how to add similar fonts and titles that fit to a specific style.

How This Will Help Me

I believe that the creation of this website has been crucial in helping me understand how to tie the brand and themes from each of my products together in one final product. Learning how to add in consistent typefaces and colour schemes will be useful if I am to ever make another website as it will make my product easily identifiable by having a clear housestyle. Additionally, inserting photos that were taken during the music video creates a wider sense of branding and gives my audience extra content that they could not get with just the music video alone, encouraging them to visit the website.

When creating the starry sky background for our digipak, we had to learn how to use a lot of new tools on Photoshop that we hadn’t used before. The first thing that we learnt was how to ‘add noise’ to a plain black background which was the base of the stars. We set the amount all the way up to 400% so we got the most out of this effect and it created a static tv look.

The next tool that we used was the ‘gaussian blur’ tool which we discovered blurs the image slightly to make it look a bit softer which we found helped us create a more authentic looking night sky as it ended up looking less digitally designed. We only used it a small amount however and set it to 0.5 as we did not want to completely lose the detail in the image.

Next, we used the adjust layers function, allowing us to cancel out a lot of the white and begin to make our image look like a night sky. To get it to the correct levels, we set the input levels to 200, 1.00 and 255 and it left us seemingly with stars on top of the black background with not too many to overcrowd the image.

Finally, before colouring our image in to create the blue-green cosmic look, we created a new layer on top of our black background and rendered some clouds onto that layer. We set the layer type to divide so it gives a softer and more natural look to the waves in the sky. We also selected some of he stars and deleted the black by pressing ctr+delete to make certain stars bigger than others, giving these ones an outer glow to seem like they are shining in the darkness.

What Could Be Improved:

Now that my music video is near completion, I have used a few more technical skills to add more interesting and exciting effects to my music video, allowing me to portray the genre and narrative in the best way.

The first tool that we used was the warp stabilizer which automatically analyses and stabilizes shots. We put this effect on a few of the shots to make them appear more steady as when we filmed them we didn’t keep the camera completely still and the shots turned out wobbly and unstable. This allows for a smoother edit and further immersion for the audience as they are not disrupted from watching the video by wobbles in the camera. This additional immersion into the video allows for the star image to become clearer as the edgy and alternative image is a lot more impactful upon the audience as they watch the video.

We used different tools such as ‘lumetri color’ to edit the colour on our videos. We had to do this as many of our shots had different lighting and colour settings as we didn’t match the settings on both of the cameras we had used. We found that an effective way to put the same settings on each different shot was to copy and paste the attributes which saved us some time. We felt that we had to do the colour correction to give our video a sharper and crisper edge to it as it had previously been quite warm colours and by doing this we gave the music video a more edgy feel to it.

Throughout the editing of my music video, I have learnt a lot of new production and design skills that mainly revolve around the use of Premier Pro which have given me techniques that I will be able to transfer to different points in my life in the future. These skills include:

The snipping tool allowed me to cut off parts of a video that I did not want to include in the final video and only include the best shots. This was especially useful for my music video as it includes lots of shots from different angles so I was able to have lots of short clips. This made the meta narrative seem more jumbled up and sporadic, giving an interactive feel. It also helped to make the video fit to the music and made the lip syncing as accurate as possible. I learnt that there were two different ways to do this, the first being the razor icon that will cut wherever your scrub bar is on the timeline of the video which was helpful for when you wanted to cut the video at a very specific place when you know exactly where you want it cut. The second way was done by dragging the beginning or end of the clip when a red icon appears which I found most useful for when I didn’t know exactly know where I wanted to cut the clip and found it worked for fitting two clips together by gradually shortening the clip down until it fit to the song. 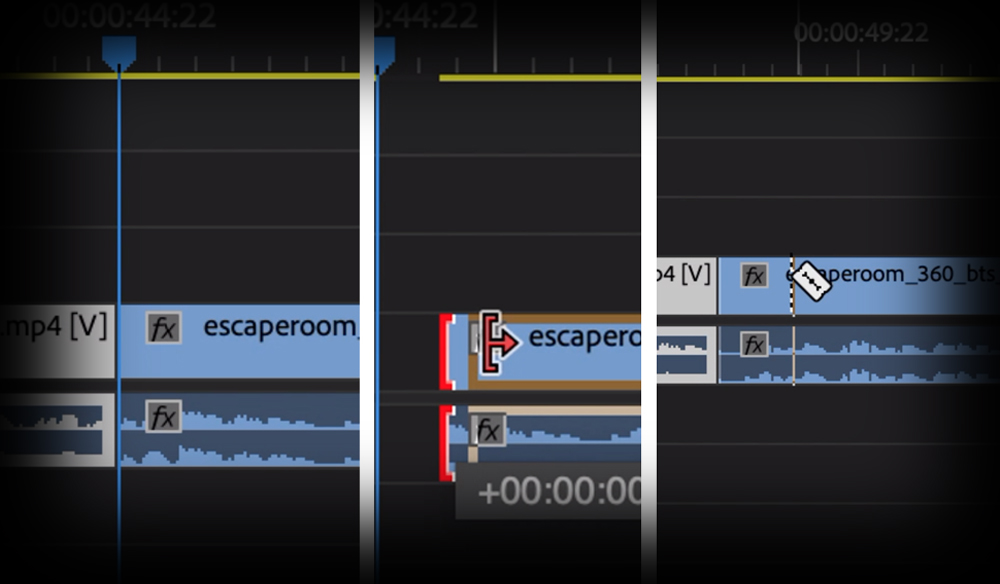 The zoom effect allowed me to give the video a more dynamic feel for the shots where the camera was still. It meant I could zoom in or out on important aspects of a shot, like the main singer, or someone’s instrument that they are playing. This help me convey the star image as the audience could really focus on the reckless and rebellious look and mise-en-scene of the stars without being distracted by other things in the frame. It also helps it fit to the genre of alternative rock as it gives a real ‘in your face’ kind of vibe. An example of me using this was in a medium close up of the singer which slowly zoomed into her to show her importance in the video. I was able to do this by going into the effects panel and selecting scale under movement and could then change the size at different points in the timeline to give it a smooth transition. 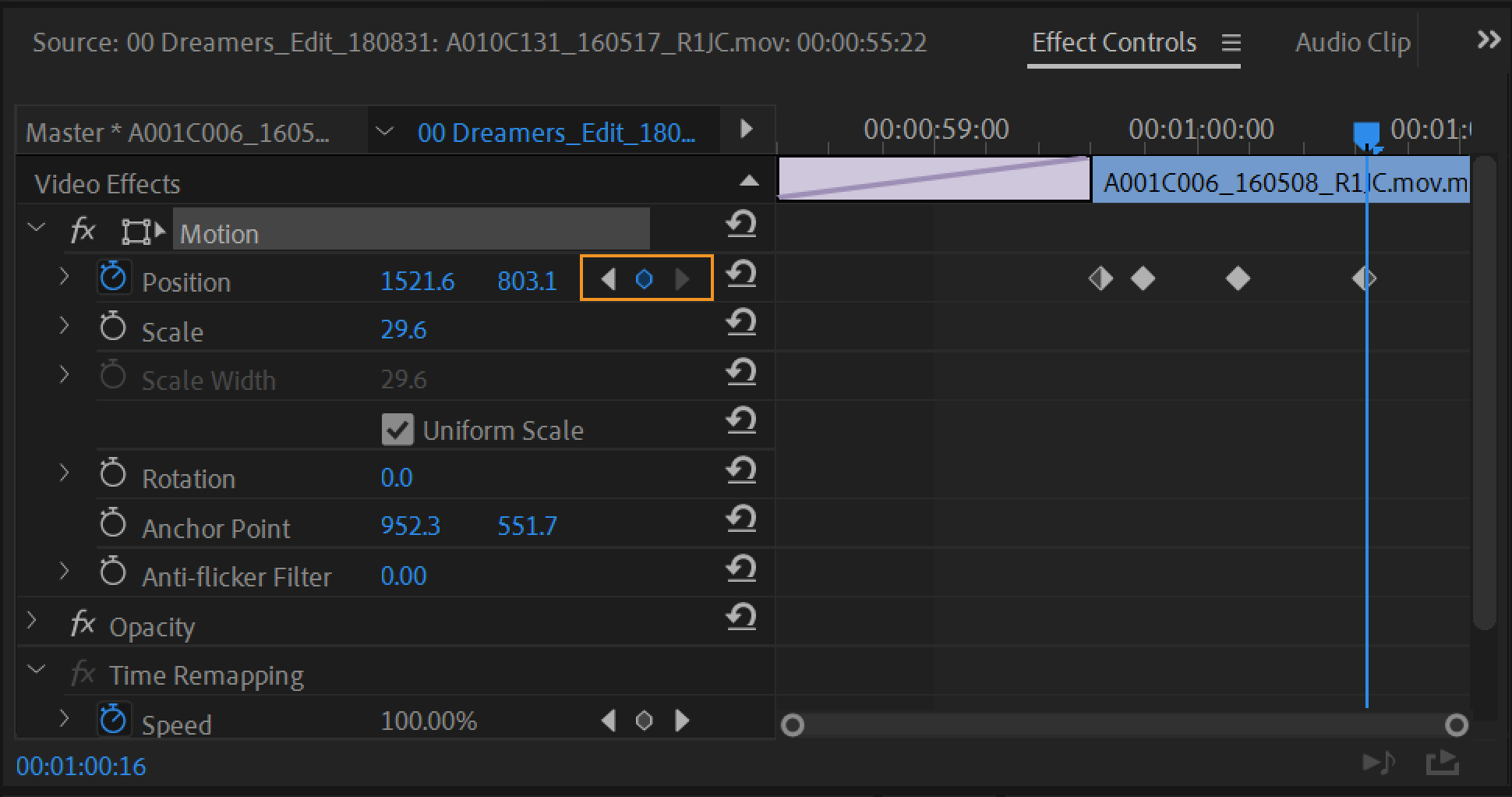 I used a few different types of video transitions throughout the music video including a fade in at the beginning, cross dissolve and dip to black at the end which all help the video fit to the music better. I used a lot of cross dissolves when the music is slower and more instrumental as the slow cuts to different shots fits in with the slow start to the song. However when the guitar riff comes in I used a dip to black to show the change in pace and then stopped using the cross dissolve so the cuts became a lot quicker and in time with the beat. These effects added to my genre as they create a sense of mystery and curiosity which tends to be a typical convention of alternative rock so will make the video appeal to my audience more. Being able to organise my folders was a very important part of my organisation as it meant that when editing my music video, I could easily find the specific clip that I would be looking for. I made sure to separate clips into close ups, folders for each band member, long shots, mid shots and movement shots. This organisation saved me a lot of time and allowed me to use the best clips that I had taken which was a large help in the production of my video.

Would Could Have Gone Better: